The Blobfish (Psychrolutes marcidus) is a fish that lives in the abyss, in the family of Psychrolutidae. It mainly lives off Australia and is worried to become endangered, due to overfishing from nets.

The blobfish is jelly-like and inflates to float around, it eats by waiting for dead organisms to drift down. It has been adopted as the mascot of the UAPS, or Ugly Animal Preservation Society (Yes, it's a real thing!).

Blobfish have experienced a major threat to their population in recent years. Though not much information is known about their population, it is well known that due to being frequent bycatch (unintentionally caught fish) in fishing nets, they could be declared endangered soon. This deep sea animal is also possibly dying quickly due to pollution falling in their habitat. They could mistake this junk for food, and eat it, causing potential death. 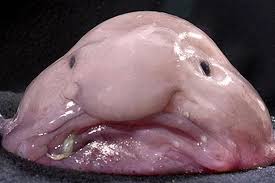 Because the blobfish has such a different shape when removed from the water, as seen in the picture above, its strange image has led to being a popular culture reference on social media sites and other everyday activities. For instance, a Blobfish appeared in the film Men In Black 3, in a kitchen that included species of aliens... this is thought to be a funny hint that, in the Men In Black world, this fish is an alien due to its funny appearance. Also, musician Michael Hearst created a song about this fish, in his album titled for unusual creatures.

Community content is available under CC-BY-SA unless otherwise noted.
Advertisement